Ghosts Of The Past 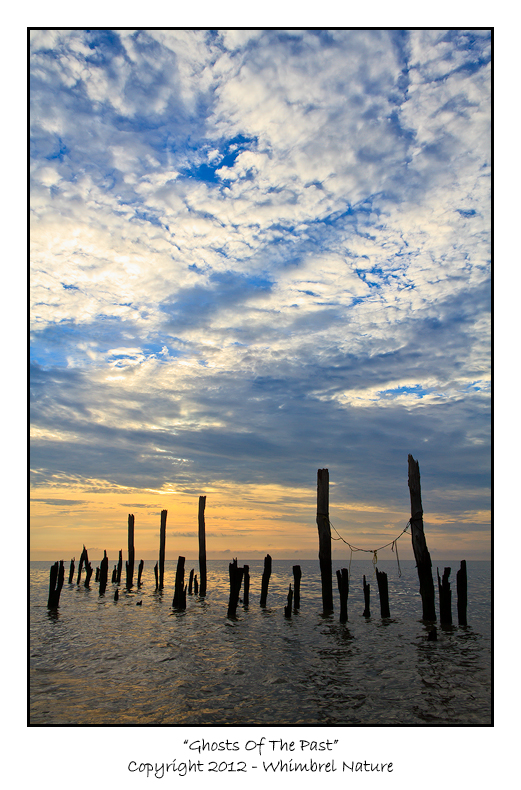 Things change; that much you can count on. The images presented here are from Port Mahon just outside of the town of Little Creek in the middle of the Delaware coast. Port Mahon was once the hub of a thriving oyster industry, populated with fishing shacks and shucking houses. Unfortunately the area began to fall prey to its own excesses. Oysters declined due to over-harvesting and the area lost much of its economic input. Port Mahon has also fallen prey to rising ocean levels and coastal erosion. Nothing but decaying pilings remains from its former heyday. In fact the area depicted here around the pilings was probably an extensive marsh less than 100 years ago.

Sea level rise continues to be a huge issue at Port Mahon, due at least in part to the excesses of modern society. The bay is very close to the road in most places. Storms and exceptionally high tides frequently wash out, damage, and push sand over the road. At the end of the road there is a public boat ramp, a scattering of private commercial landings for local watermen, and one modern pier that receives tankers of jet fuel for Dover Air Force Base. Thus there is great pressure to keep the road open and passable. After a recent large storm that created a lot of damage to the road, there was a huge project to protect the road by placing tons of riprap (large rocks and pieces of broken concrete) along most of the bay side of the road.

Unfortunately, this has ushered in a new chapter in the demise of Port Mahon. In more recent history, Port Mahon had become a mecca for horseshoe crabs, the shorebirds that feed on their eggs, and the people who enjoy watching them. But the recent efforts to shore up the road (probably futile in the long run) have greatly impacted the habitat that supported these groups. The horseshoe crabs still come, but there is much less beach available for egg-laying, and hundreds, if not thousands, of crabs die after being caught in or crushed against the riprap. The shorebirds that prefer to forage on the beach have all but left, and even the species that are more tolerant of feeding on and among the rocks, like the ruddy turnstone, seem to be slowly dwindling.

Probably the best plan of action after the storm would have been a strategic retreat. Abandon the road and perhaps put some deeper water breaks in to control erosion, perhaps truck in some sand, then let the bay, beach, and marsh find their new equilibrium. Leave the place to the birds, crabs, and the few intrepid human souls willing to get out of their metal carriages and do some walking. Unfortunately we will keep fighting the inevitable for a few special interest groups and in the pseudo-ecological guise of preventing further erosion and "protecting" the marsh that lies on the other side of the road. Meanwhile many of the vulnerable species will move elsewhere, or more likely decline. The overall decline of Port Mahon will continue unabated. 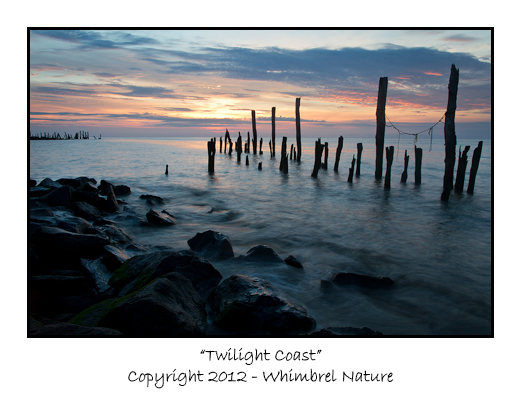 Posted by Whimbrel Nature at 12:22 AM